For thousands of years, humankind has used concrete to build pretty much everything – roads, buildings, dams, sidewalks, recreation areas. In fact, concrete is the most abundant man-made material on Earth. 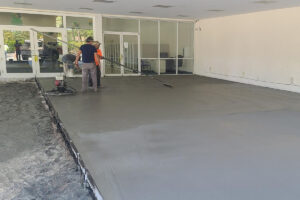 The controversial issue with concrete today is its carbon footprint. Cement is the main ingredient in concrete; the one that makes it strong. The process of making cement, however, requires calcium carbonate, also known as limestone, to be superheated. This releases carbon dioxide (CO2) into the atmosphere, increasing greenhouse emissions and fueling climate change.

According to estimates from the International Energy Agency, cement is responsible for 7 percent of global man-made greenhouse emissions. That makes it the one of the largest single industrial emitters in the world, second only to the iron and steel industry.

Concrete producers are working with scientists to change that and reduce the carbon footprint of cement. Canadian company, CarbonCure, for example, is making concrete that traps carbon dioxide emissions forever while reducing how much cement is needed in a concrete mixture.

CarbonCure injects captured CO2 into concrete as it’s being mixed. Once the concrete hardens, that carbon is trapped forever. Even if the building is torn down, the carbon stays put because it reacts with the concrete and becomes a mineral.

In a recent case study, the producer conducted a three-way comparison among a standard mix, a mix with reduced-binder content, and the CarbonCure process, which is a reduced-binder mix with a dose of CO2.

This data shows concrete producers can use the strength-enhancing effect of CO2 to reduce the amount of cement – the most expensive ingredient in concrete – while reducing the carbon footprint of the mix.

The construction industry as a whole has put an increased focus on sustainable practices that reduce carbon emissions. This new process that reduces the carbon footprint of the most abundant man-made material on the planet is sure to have a positive impact on greenhouse emissions.